What is the Lymphatic System?

The lymphatic system is a system found throughout your body, and consists of lymphatic vessels, lymph nodes and other lymphatic tissue. It has two main functions: 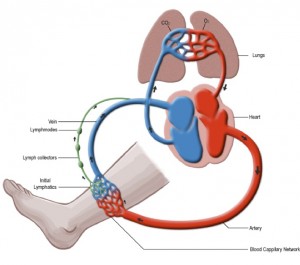 The Superficial Lymphatic System The heart lumps blood containing oxygen, proteins, water and nutrients to the cells of your body (red).When the cells have used what they need, the excess proteins, water and waste products (as well as any bacteria, viruses or other foreign organisms) are transported back towards the heart. This is partly transported by the venous system (blue) and partly by the lymphatic system (green). The lymphatic fluid that is transported by the lymphatic system is filtered and processed and “cleaned” by lymph nodes before it is pumped back into the venous system.

The superficial lymphatic system, which is the main system involved in the development and treatment of lymphoedema,  consists of three main parts, which differ from each other in both their structure and their function. 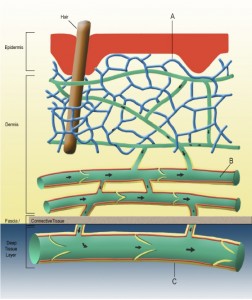 The Superficial Lymphatic System: A: Initial Lymphatic Vessels (blue) and Pre-collecting Vessels (narrow green). These initial lymphatic vessels have no valves and therefore fluid can flow in different directions in this layer. Directional valves are variable in the pre-collecting vessels. B:Lymph Collectors. These vessels have valves as well as smooth muscle in their walls to pump fluid towards the lymph trunks. Their function is transport of lymphatic fluid. C: Lymph Trunks. These deeper, larger vessels have valves and smooth muscle in their walls, and transport the lymphatic fluid to lymph nodes.

These are microscopic vessels/ capillaries that originate just beneath the skin in the sub-dermal layer throughout the surface of the body. They begin as finger-like projections into the tissue and then become a network of vessels, almost like a honey-comb. It is in this “honey-comb”-like layer that lymphatic fluid is taken into the lymphatic system from the surrounding tissues. These initial lymphatic vessels, because of their structure and that they have no valves, allow lymphatic fluid to flow in different directions. There is no pumping action in these vessels, and fluid simply flows because of differences in pressure within the honey-comb network. The uptake of fluid into the initial lymphatic vessel is a complex balance of a number of factors, only a few of which are described here to provide a basic understanding of the process. Once the fluid is in the vessel, it flows towards the pre-collector and collecting vessels, to be transported to the lymph nodes for “cleaning”. 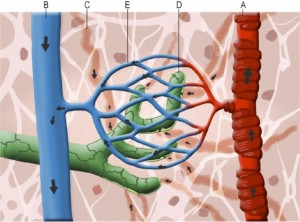 The Initial Lymphatic Vessel: A: Arteriole (capillary) B: Venule (capillary) C:Lymphatic Tissue Channels: Interstitial fluid (ie fluid between the cells) flows towards the initial lymphatic vessel along tissue channels. These are not defined vessels but rather pathways in the tissue. D: Initial Lymphatic Vessel: These begin as finger-like projections into the surrounding tissue, and are solely responsible for the uptake of lymphatic fluid from the superficial layer into the lymphatic system to be drained away. E: Venous side of the capillary loop. Some fluid, water, small molecule proteins and other products are also drained away by the venous system. The venous and lymphatic systems work together to drain fluid and cellular waste product away from the tissues. 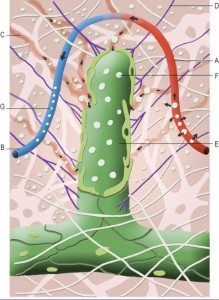 atic Vessel: This vessel is microscopic and consists only of a single layer of endothelial cells (E). There is no pumping mechanism to get fluid from the outside of the vessel to the inside for drainage. However, there are anchor filaments (D) which attach to the endothelial cell and also into the surrounding tissue. When the pressure in the surrounding tissue increases, it causes the anchor filaments to tighten, thus pulling the junction between the endothelial cells open, which allows fluid to flow through the tissue channels (C) and into the initial lymphatic vessel. When the pressure inside the vessel equals or is greater than the surrounding tissue, the anchor filaments relax, and allow the endothelial cell junctions to close. Fluid then flows through the initial lymphatic vessel towards the pre-collector and collecting vessels. The artery (A) bring large molecule proteins (F) and small molecule proteins (G) to the tissues for use. However, only the small molecule proteins can be drained by the vein (B). The larger molecule proteins have to be drained by the lymphatic system. Therefore if the lymphatic system is dysfunctional, the larger molecule proteins will be left behind in the tissues. This is why a true lymphoedema has a relatively higher protein content than other oedemas

The second feature is that they have valves (like in your veins) that allow the fluid to flow in only one direction, that is towards the deeper , larger vessels (lymph trunks) and then towards the lymph nodes.
From the initial lymphatic vessels, the fluid is taken into the deeper and bigger lymph collectors. These vessels have two special features. Firstly, the have smooth muscle in their vessels walls which allows the vessel to contract, and in this way to pump the fluid towards the lymph nodes. 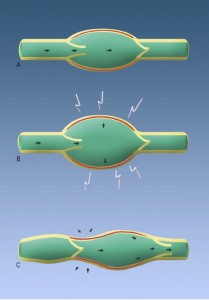 The Lymph Collectors: In the diagram above, the area between two valves in called a lymphangion. Lymphatic fluid flows through a one-way valve into a lymphangion (diagram A). This area fills up with fluid as the valve at the other end is still closed. As this area fills more (diagram B), the walls (which have muscle in them) stretch. When they have expanded or filled sufficiently the muscles in the vessel wall contract (diagram C), and push the fluid forward into the next lymphangion. In this way lymphatic fluid is pumped along the collector vessels towards the lymph trunk and lymph nodes.

Lymph nodes  (you may have heard them being called lymph glands) are an integral part of the lymphatic system. The total number of nodes found in the body varies, but is considered to be between 600-700, and they vary in size. In adults they may be as small as 0.2 mm and up to 30mm long. The function of the lymph node is to filter and process the tissue waste products, as well as to begin or initiate the body’s immune response if foreign organisms (including bacteria and viruses) enter the system.

mphatic fluid (consisting mostly of water, large proteins, cellular waste products and foreign organisms) is pumped towards the lymph node along the large lymph trunks (A). The lymph node is a complex structure that “cleans” and processes the lymphatic fluid. Some of the processed fluid is put back into the venous system (C), but some is sent along a lymphatic vessel(B) to the next set of lymph nodes for further “cleaning” and processing before being returned to the venous system.

Lymph nodes are most commonly found in groups or complexes which drain particular areas of the body. Very generally the body can be divided into five main drainage areas.

Groups of lymph nodes are found which drain each area.

These are found in the groin area (called the inguinal area). These drain the whole lower quarter on the side that they are found. For example, the right inguinal nodes drain the right leg, right lower back and right side of the abdomen.

These drain the head and neck region. Some are found just above your collar bone (supraclavicular nodes) and some in your neck (cervical nodes). There are no lymphatic vessels or lymph nodes in the brain. 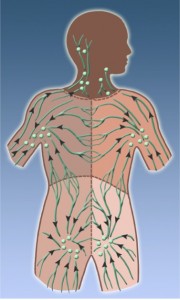 What happens if there is a problem with the superficial lymphatic system?

There are other complexes of lymph nodes in small groups e.g. in the breast, behind the knee (popliteal nodes) and inner elbow (antecubital nodes). However these still drain into the other major complexes. There are also a large number of lymph nodes in the pelvis and around the gut. 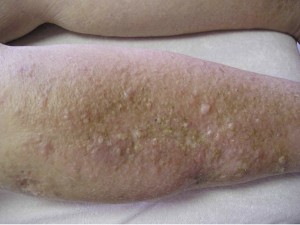 Trophic Changes: Chronic, untreated lymphoedema results in changes to the skin. These may include skin discolouration, papillomata and thickening.

If lymphoedema is untreated it is progressive and worsens over time. In these cases not only does the swelling increase, but some of the changes mentioned above also progress and worsen. 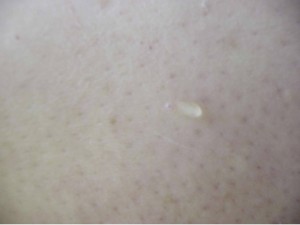 when lymphatic fluid “leaks” out through the skin. It may only be a small droplet, but may also be severe, constant lymphatic fluid leakage. If the lymphoedema is treated, and the oedema managed, the lymhorrhea usually stops. Treatment is vital as the surrounding skin may become macerated and the risk of infection is increased.